going quickly through an old box of photos, i found this one! me at 5.  and my memory is not too far off. this did actually happen! see forethoughts…

i’m confusing a couple of memories. no cowboy hat. and I am the rider, not Cindy, although she probably has one of these around somewhere, too. my parents were very into keeping things equal between the two of us. 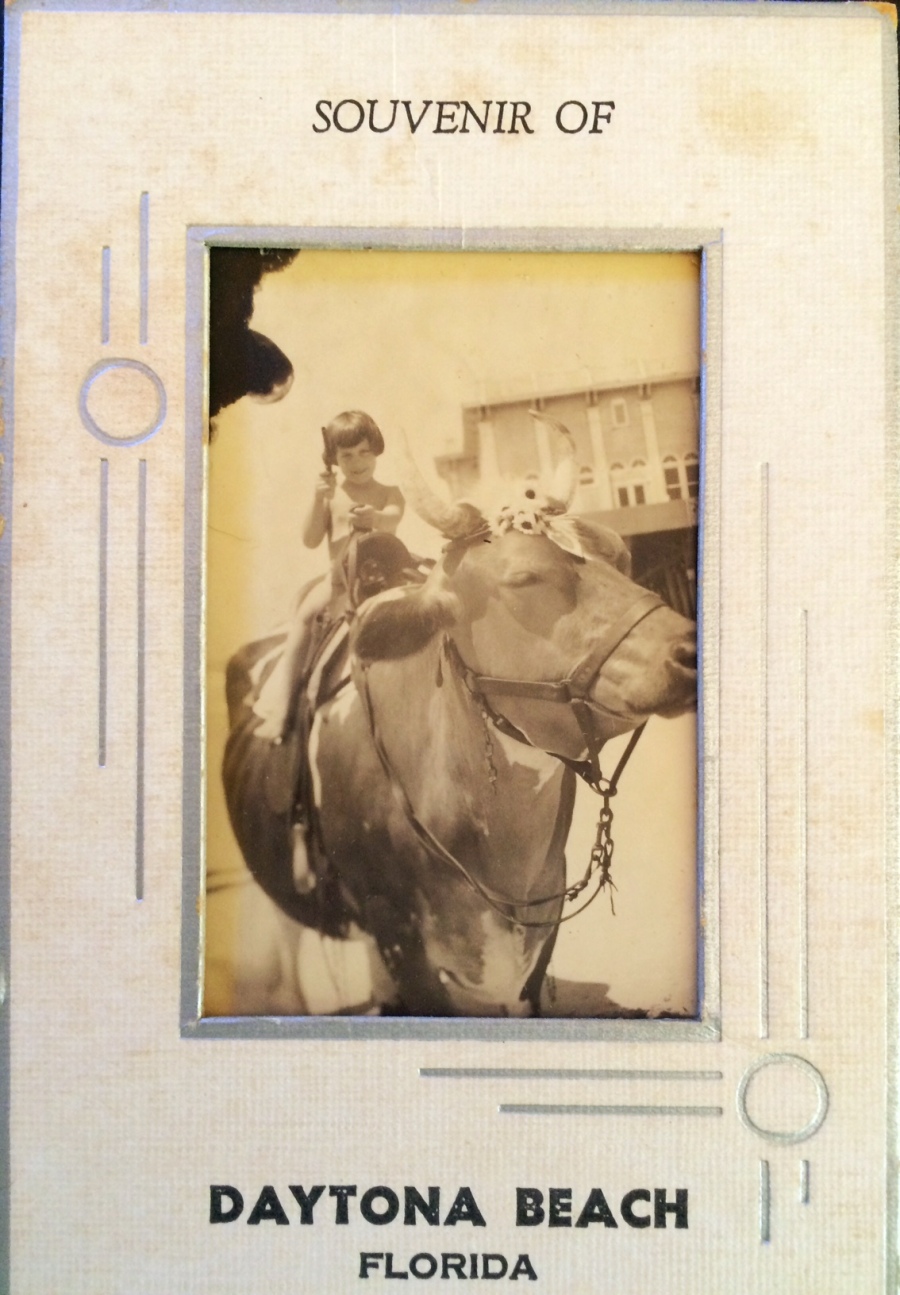 yes, i do remember this. when i thought about it, i couldn’t believe that it actually was true and not a dream. but it wasn’t. I am thinking of a photo of Cindy, wearing a plaid shirt and a cowboy hat. and it was Daytona; she was 4 or 5 years old, and she was sitting on, from what i remember, a brown and white cow, on the beach in Daytona. So maybe there was a cow too?

of mulberry pie. The tree is finished for this year.

How to make a mulberry pie: You need a lot of mulberries — about three cups, I guess. 2/3 cup sugar, 1/4 cup flour, pinch of salt, sprinkle of cinnamon, juice from a half a lemmon. dot with butter. cook in preheated oven 400 degrees for 15 minutes. turn down to 350 degrees and cook for at least 30 minutes.

Earlier in the spring I took several photos of the dwarf weeping mulberry. What surprised me was that while mulberries are deciduous, in my 9b garden, just barely. Before they had lost all the old growth they were covered with new leaves and ripening fruit. I was still picking last year’s fruit when the new spring growth spurt began.

The blacker the dwarf weeping mulberry, the sweeter. At this stage they still have some tartness and taste like blackberries. Often I pick a handful that includes mulberries in varying stage of blackness. Eaten together I enjoy a nice variation of sweetness.

While the dwarf weeping mulberry produces the greatest abundance of fruit in the spring, it continues to fruit year round in this climate.

In earlier times in Florida most everybody had the large mulberry tree in their yard. This meant a reliable tree to produce tasty fruit. But as the convenience of store-bought fruit increased the mulberry fell out of favor because the dark fruit stains driveways, and pretty much anything else. Plant nurseries responded to this annoyance with mulberry trees that did not fruit, yet still provided a carefree shade tree.

The problem with the mulberry as a shade tree is that it sends up so many new plants from the roots that if the homeowner is not careful, the entire yard is soon overtaken by mulberry trees. Longtime Floridians have probably seen this a time or two at a house that has been left empty with yard neglected.

The dwarf weeping mulberry becomes a good solution, which can be grown in a large planter or a small-space garden.

One caution: I notice that mine wants to product very vigorous fruitless limbs from the base. I’m only guessing but it appears that the dwarf plant is grafted onto a more vigorous fruitless rootstock. Simply remove any stems from the base that do not produce fruit. I have a feeling they could overtake the plant if left alone. They grow faster and stronger than the fruit-laden stems.

If concerned about size, the dwarf weeping mulberry seems to be perfectly happy in a large planter.

Sure, birds take their share of fruit, but you should still have plenty. In general birds are such good helpers at removing insects from the garden, I see no reason to deny them a share of the harvest.

Do not use pesticides. There is no need and you would only be adding unnecessary chemicals to your food. As seen in the photo the old growth does begin to look, well, old. That’s not a problem as it is only trying to go through its normal deciduous cycle.

I do not have the dwarf variety. my tree is huge. and the fruit is a fairly good size, too. the larger ones are about the size of a cap for a pen.

it’s weird, but I think they are cute.

I don’t get it, really. But I guess I think their armor is jewel-like. maybe on the same plane as a scarab?

I don’t know how I ended up with a pet turtle when I was a kid, but I did. Someone, I don’t think it was me, bought him from Woolworth’s. I named him Freddy the Freeloader, and I somehow became in charge of him. He ate turtle food, of course, but he also ate flies, lettuce and he loved tadpoles. So weird. So gross, but, I didn’t mind…

I had him for about a year and when we went away for the summer, I left him with my grandmother, and he didn’t do well. When I came back, his shell was all soft. I thought maybe he was molting or something like that. Anyway, he died, and we buried him in a shoebox, I think, and went out and bought Freddie II, who lived a while, but not nearly as long as Freddie I.

(Thanks to the Internet, I just learned that he had soft shell syndrome, from lack of calcium or insufficient sunlight.)

Anyway, that’s the sad story of the Freddies.

I don’t have a clue.

But just look at how pretty and the esteem we bestow on this little creature who rises from the… well, you know.

is it foldable? Will it go to a concert? does the suite contain a sofa chair?

My world has a lot to do with sounds, and the lack of them. My favorite dreams are music dreams — just pure music. no images. I think, if there is a heaven, it will be full of music like that.

There will be some light in heaven, too. Sparkly points of light. So, here’s some of that, too.

I’m all set for my next baby gift.

So, what does the MOB have to be thankful for? Plenty! For one thing, I am really thankful that I don’t mind being a MOB.

It took plenty of time to get to this point, and there are some advantages.

1. The kids are grown and they actually are entertaining and nice (yes, for those of you with little ones, the day will come!)

3. I have a roof over my head (It’s old. the original tin. And it doesn’t need to be repaired. I love it! The insurance adjuster gave it a 90 percent, and said old tin roofs are the best! and the plumbing and wiring aren’t bad, either I have been told).

4. My body is holding up for the time being, and I haven’t paid it a bit of attention (I file my nails while driving).

5. I have lovely friends and a darling family.

6. And even though the economy sucks, I think I might be getting a toe hold.